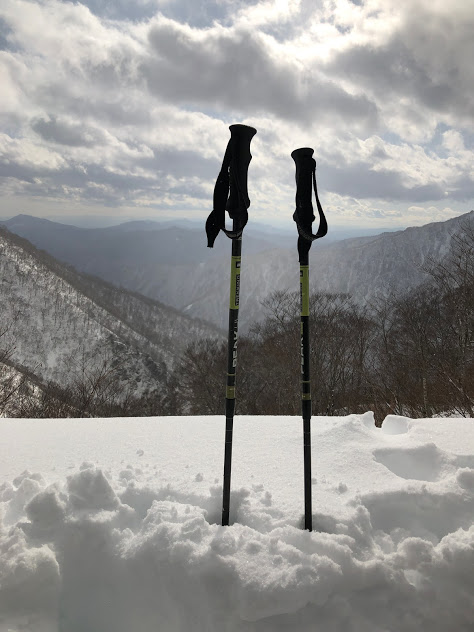 After climbing Ena in December 2019, I looked forward to more winter hiking. Winter hiking needs special attention compared to other seasons. First is gear – you need a lot more of it. Minimum gear includes the following (note that this list assumes day hiking only).

According to the map, there are several trailhead options, but if hiking in the winter, they close the road to the Nikkoshiranesan Suganuma Route, Tozanuchiyuryo Parking Lot. There’s another parking lot at Sanbonmatsu, which seems like it would be open, but the hiking route is quite a bit longer.

I used the lift at Marunuma Kogen, which takes you up to 2000m. The round trip lift ticket was a bit pricey, about 4,000 yen, but it saves you several hours of hiking, and they let you borrow a locator device. I would certainly avoid the lift if hiking in the summer. From the top of the lift, there is a torii with a shrine near by. This area is well trodden, which makes it slippery, so make sure you don the crampons. Shortly past the shrine, the trail becomes single track. Several snowshoers recently came through here before me so the trail was easy to follow and partially packed down already. If hiking with crampons instead of snowshoes, you’ll probably post-hole a few times, but if sticking to the route, it shouldn’t be too bad most of the way.

After a couple hours of hiking through the forested area, you’ll reach a rocky outcrop. When I went, this area was extremely windy, and even the gear that I had was marginally useful for keeping my face and hands warm. I could hardly see the path or markers from here, but I met a couple other hikers who had been through the area before and I tagged along with them for the last part of the climb.

I didn’t linger at the top for too long because of the wind. Once I got back down to the tree cover area, the wind was much less of a factor, and I just followed the same route that I took up. The entire hike should take less than 4 hours.

I stayed at a Hotel Route Inn in Shibukawa that night for my next hike at Tanigawa. The Tanigawa cable car is a 1 hr drive from Shibukawa. There are several alternate routes to access Tanigawa, but I chose the easiest for a winter climb. The round trip ride on the cable car cost around 3,000 yen, with another 1,000 yen for parking. 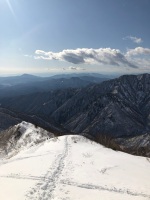 From the top lift station, you’ll have to ascend a ski slope. Map shows this taking 10 minutes, but it will take longer in the winter. The trail was well marked from previous hikers coming through. After about 45 min to an hour, you’ll pass by a shelter, immediately followed by the steeper section of this hike to the summit.

I had clear weather for most of the ascent. The summit was entirely shrouded in clouds, and was extremely windy. It was difficult to see the path. There’s actually not much room here from the cliff, but I didn’t even realize it because of the low visibility – which could be dangerous if you get too far off track.

There is a hut that is open for hikers at the summit as well. I don’t think its meant for overnight stays in the off season, mainly intended as an emergency refuge in bad weather, which Tanigawa is notorious for. The entire hike, including the cable car ride should take 4-5 hrs in the winter. Since I was shut out from a view at the summit, I’ll probably hike this one again in the spring/summer/fall.